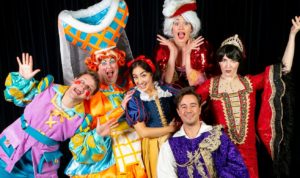 Richard and Jane were delighted to join Harrogate Theatre for its 120th anniversary celebrations. Oh yes they were!

As proud supporters of the theatre which is at the heart of Harrogate and its cultural offer, we were invited to enjoy a pantomime performance of Snow White, along with the great and the good of Harrogate’s business community.

And a cracking show it was, featuring a talented cast including Harrogate panto favourite Tim Stedman and the marvellous Howard Chadwick as the extravagantly costumed dame.  With superb sets and chuckles aplenty, it’s no wonder Harrogate panto won national recognition with a Great British Pantomime Award last year.

After the show we joined theatre trustees, ‘Happy Harry’ and the rest of the panto cast (pictured) at an after-show celebration of the landmark anniversary.

To mark the occasion, here’s seven things you might not know about Harrogate Theatre: